Eleanor Poulard has been a famous tv cook for over 20 years. Her notorious career has been sprinkled with scandal, success and selling out. Now with low book sales, binding contracts and stubborn producers, Eleanor is forced to host a crumbling reality tv cooking show called 'Pressure Cooker.' With music, live cooking and comedy, and her exasperated floor manager Becky, will Eleanor be able to handle the pressure, or will she flip her lid? Find out on, PRESSURE COOKER! 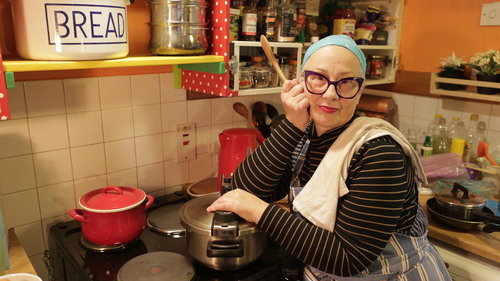 Gill Manly is an actor, writer, musician and activist. She started out in theatre but turned to jazz and has performed at The National Theatre, Barbican Centre and Royal Festival Hall as well as being a regular at Ronnie Scotts. During her career she has released three albums, worked with a string of exceptional jazz musicians and mentored young artists. Her return to theatre began in 2017 with a part in South London Theatre’s Bette & Joan – The Final Curtain, and in 2018 she was commissioned to make a work for Croydonites Festival (Radio Apocalypse). In 2019 she premiered a new work during Croydonites in collaboration with BAFTA nominated actor and writer Joanna Scanlan. Entitled The Elephant in the Room - the show sold out and received rave reviews.

Ellie Scanlan is an actress, writer, director and drama facilitator. ​She studied acting at The Actors Class under artistic director Mary Doherty, playwriting at The Royal Exchange Theatre Manchester and Wilton's Music Hall London, facilitating and directing with The National Youth Theatre and The University of Manchester.  ​Ellie is also the producer and joint creator of The Unfinished Things Festival with Will Tribble. ​In 2019 Ellie directed, co-wrote and starred in 'Beneath These Tarmac Cracks' which premiered at The Not Quite Light Festival in Salford. She also appeared in The Elephant in the Room which premiered at Croydonites Festival. In 2019 she also joined The Omnibus Theatre in Clapham as their new Youth Theatre Director.

About The Elephant in the Room...

"Manly’s voice is wonderfully raw and the musical numbers, directed by Adrian York, bring an extra dimension to the storytelling...there was recognition and gratitude for the strength and honesty of Manly’s performance." Helen Butlin, CroydonWrites

"The Elephant In The Room was cutting edge, transgressive stuff."  Elizabeth Shepherd, CroydonWrites

The Spread Eagle Pub Theatre does not have wheelchair access – apologies for this.