Voice Gym sessions hosted by Derby Theatre and supported by In Good Company.

A ONE OFF AUDIOBOOK  NARRATION MASTERCLASS WITH GUEST COACH AND AWARD WINNING AUDIO BOOK NARRATER HELEN LLOYD, (read more about Helen in her biog) PLEASE NOTE THIS IS A 3hr SESSION AND WILL BE HELD AT DERBY REHEARSAL ROOMS AT FORMAN STREET, DERBY DE1 1JQ. THERE IS ON STREET PARKING OR A PAY AND DISPLAY NEARBY, OR YOU CAN WALK FROM THE STATION IN 20MINS.

What we will cover:

Recording audiobooks is very different from doing any other kind of voiceover or voice acting work. Audiobook narration is a challenge – you’re not only responsible for ‘telling the story’ bringing an author’s vision to life, for creating not only a compelling narrative voice, but also an array of unique and believable characters. Audiobook narration also requires stamina, concentration and good organisational skills. You also need good creative instinct and the ability to self-direct – as even when recording in a professional studio – the creative choices are largely down to you! If you’re recording remotely, you also need to have some basic technical knowledge of how sound works in your recording space and a thorough understanding of your own recording set-up and software.

There’s a lot more to it than reading aloud!

WHAT WE’LL WORK ON

· Breaking down a MS – preparation with a purpose

· The vital questions you need to ask yourself – Who?, What? Where?, When? Why?

Practical sessions – please can everyone bring a short piece to read from a book that you think you might be cast to narrate – so play to your strengths and age range. Reading time should be no longer than two minutes – and can be from any part of the book. Preferably fiction, including narrative and dialogue between at least two people. Please bring two copies of the MS you choose. No VO scripts or newspaper articles.

· Creating sample reads – what to choose and why

The Voice Gym is suitable for beginners to advanced.

This session will be held The Derby Theatre Rehearsal Rooms, Forman Street, Derby. 10:30am - 1:30pm.

ANYONE WHO BOOKS ONTO THE VOICE GYM WILL RECEIVE 10% OFF ANY SUBSEQUENT 1:1 COACHING SESSIONS. (This does not include any packages Speakeasy offers which are already discounted) 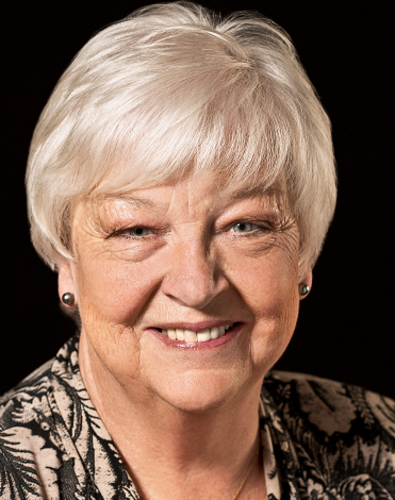 HELEN LLOYD
My background is acting. I trained at The Guildhall School of Music and Drama graduating in 1969 and spent the first fifteen years of my working life as a professional actor mainly in Rep, but also in television and radio. Highlights include playing at the the Edinburgh Festival, the National Theatre at the Old Vic in ‘The Alchemist’ and in Jonathan Miller’s production of King Lear’, I played the title role in ‘Miss Julie’ at the Roundhouse Studio and was the female lead, Mollie Ralston, in year 29 of ‘The Mousetrap’ in the West End.

In the early 1980s I moved into television, initially as a presenter and continuity announcer for ITV Central before moving behind the camera as a researcher then a programme maker - while at the same time building a freelance career as a voice actor – which as it turned out, was a very smart move. In 1988 I was awarded a Winston Churchill Fellowship to Australia to look at Social Action Broadcasting – an area of particular interest. Back at ITV’s regional programme department as a producer. I was involved in research, casting, crew and location logistics, scripting, directing and producing documentary programmes and series for ITV, some studio based, some out on location. I was also often second camera and sound recordist and I edited both audio and video.

Following redundancy from ITV, I briefly returned to my roots as an actor and also as a theatre producer. I also taught acting and voice at Lichfield Theatre and Derby Playhouse before creating my own studio at home and returning to voice work.

Though I have recorded audio across all genres from audio description to elearning, video games to documentary narration, the majority of my work is now as an audiobook narrator – and sometime producer. All but four of my seventy plus audiobooks were recorded remotely from my personal professional recording space. I have narrated for Harper Audio, Penguin Random House and Audible Studios in both the US and the UK; for Blackstone Audio, Macmillan Audio, Disney Audiobooks, Findaway, Brilliance, Dreamscape and Spoken Realms in the US; and for UK imprints including Rosa, Lamplight Audio, Whole Story Audiobooks, Ukemi Audiobooks and Quercus. I was nominated for the One Voice Awards best non-fiction audiobook performance in both 2018 and 2019, and was awarded the best Fiction Audiobook performance in 2019. I am also nominated for best Biography narration in the 2019 SOVAS Awards.

My audiobook narrator coaching course is designed for trained actors wanting to expand into audiobooks or narrators with some experience who want to improve their narration skills and develop their ability to self-produce and work remotely. My audiobook coaching is not suitable for absolute beginners and demands that participants have the ability to produce quality recordings from home and are familiar with their own recording and editing software.

I blog regularly about Audiobooks, Narration, Acting and many other aspects of the industry based on my personal experiences of a career spanning more than fifty years. I am active on Social Media – you can find me on LinkedIn; Facebook, Instagram, Soundcloud, YouTube and Twitter.

I am a member of the following professional organisations:

• The Audio Publishers’ Association (US)

The access to the upstairs rehearsal room is via stairs and there is no available lift.

Refunds available if cancelled with 48hrs notice. Failure to attend will mean the forfeit of payment.

Anita is a professional voice, accent and acting coach, based in Sheffield with over twenty years of industry experience. She has taught at leading drama schools and colleges and runs a succesful private coaching business working primarily with professional actors on voice, text and accents, supporting them through audition to performance but also corporate clients developing their public speaking and presentation skills. Anita maintains strong industry links and has coached clients succesfully through auditions and performances including Theatre Credits include: One Man Two Guvnors, Abi & What Fatima Did (Derby Theatre) Under the GreenWood Tree (Hammerpuzzle Theatre Co/Everyman Cheltenham) Anita trained as an actor at ALRA working professionally for many years and holds an MA In Professional Voice Practice from The Royal Birmingham Conservatoire.