Join us for a sharing of our new Enlightenment Café production, ZΩΗ (the greek word for life - pronounced "zoi").

A video message plays.  A voice pierces through the static:  “Time is running out.”

Join ZΩΗ's Agents of Change, hear stories of real people inspiring change on the front line of the climate emergency, and work alongside experts to help halt humanity’s extinction.  All in a synapse snapping night of theatre at London’s first eco-conscious nightclub.

Speculation about human destiny has infused culture through myth and cosmology since ancient times.  Prophetic tales told of what the future holds, of apocalypse and resurrection, often conveying moral messages for the here and now.  ZΩH taps into that age-old drive to ponder the possibilities of what lies ahead and reminds us that the future is not preordained but subject to human actions and choices.

The show utilises the UN’s Millennium Ecosystem Assessment, the Independent Futures Forum’s World Game, and the real stories of four women (from Chad, Uganda, Vietnam, and the USA) to provide audiences with a glimpse into the lives of climate witnesses in 2019 and 2050.

Can your ideas transform our future?

"While there's plenty of talk, at the moment, about bridging the gap between arts and science, this is a show that actually does it; and provides a good, exhausting, thought-provoking night out, into the bargain." **** Joyce McMillan, The Scotsman (Deadinburgh)

Tickets - what are the teams about?

Become an Agent of Change in any one of ZΩΗ's twelve research teams:  Water, Worldview, Governance, Habitat, Wellbeing, Biosphere, Energy, Wealth, Food, Trade, Community or Climate.  In the second half, the audience is split into these teams.  The different ticket bands allow groups to remain together for this portion of the show.  Please book your tickets by choosing a team.  Each group is headed up by a scientist or expert.  Partner organisations include: UCL; University of Kent; London Wildlife Trust; and Green Space Information for Greater London.

18+ only.  We are holding a separate schools sharing on the afternoon of the 14th.  If you are interested in attending this show contact [email protected]

This R&D is made possible by support from Arts Council England, LAStheatre, My Green Pod and Studio 338. 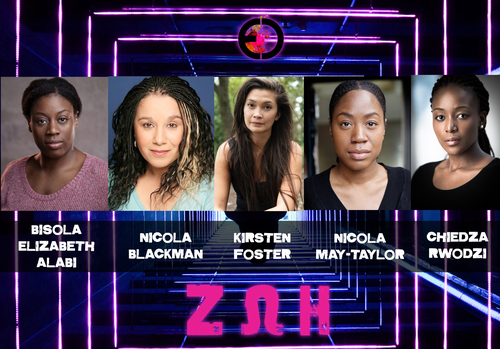 Schools Workshops for the project developed and delivered by Liz Bate and BBC Fellow in Community Theatre, Toby Peach.

Doors open at 7 pm. The show begins at 7:30 pm. Latecomers will be admitted to standing in the bacony.

The Enlightenment Café create theatre that combines the beauty of science with the power of performance – bringing together theatre, education and spectacle in dynamic, participatory and entertaining events. The idea comes from the Enlightenment Cafés of the 17th Century (also known as Penny Universities). These social hubs were 'theatres of exchange' for new thinking in science and philosophy, in politics and arts. These coffeehouses were magnets for talent. Ideas spread, wits and virtuosi sparked off one another, and experiments were conducted. Through collaboration with enlightened individuals, we wish to heal what TS Eliot described as the dissociation of sensibility – the false dichotomy between art and science. AWARDS: Best Experiential Event - Scottish Event Awards, The Chairmans Award - Scottish Event Awards, Best Stem Project – NCCPE Engage Awards, Ingenious Award - Royal Academy of Engineering.