'Success' as a Creative: Kicking Down the Patriarchy. Panel discussion + entertainment from kick-ass womxn

'Success' as a Creative: Kicking Down the Patriarchy. Panel discussion + entertainment from kick-ass womxn

Join our panel line-up of kick-ass womxn for an evening of discussion about what it means to be successful in the creative industries and how we can use creativity to kick down the patriarchy. The event will highlight and celebrate artists who are rebelling against heteronormative society with their work.

The evening will include performances from comedy duo Accomplished Ladies, drag artist Heather Duster and poet and performer Suzy Gill.

Panellists include Shannon Mulvey and Jorja Isabella James who will be discussing their show Curated Pleasure, poet, performer and theatre maker Suzy Gill, playwright Chantelle Dusette and actor Kudzai Sitima. The panel will be chaired by Christine Mears who is a theatre director, creative producer and co-founder of Lobster Frock Theatre Company.

ACCOMPLISHED LADIES - Phoebe Hitt + Georgina Thomas
Accomplished Ladies is a period drama musical sketch show with an historical feminist twist. Expect a comedy journey through time presented through a series of sketches that tell stories of two women in challenging, compromising and damn right heroic situations. Clever, witty and at times - let’s be honest - historically dubious, Accomplished Ladies will leave you feeling uplifted and ready to take on the present day.

SHANNON MULVEY
Shannon Mulvey is a feminist punk performance activist. Shannon is the Artistic Director of feminist performance collective Sisters of Eden who performed their show Volume I: Blood at Camden People’s Theatre, Fragility Festival and Theatre Utopia. As a solo artist she has performed at venues such as VFD and Grow Tottenham— most notoriously with her drag king alter ego Joe the Wall Street Wanker. Alongside her performance work, Shannon created the feminist experimental film Heirophants 5.0 which was exhibited at The Crypt Gallery in 2017.

She also curated The Anarchist Feminist Party (Ugly Duck warehouse, London Bridge) which was a punk performance rave and fairground of anarchy where performance, music and art intertwined in a revolutionary community of rebellion. Shannon has facilitated workshops at Theatre Deli, Anti University and Tate Modern, she also lectures on the History of the U.S. Women’s Liberation Movement and Experimental Performance Practice.
As a working class artists, social inclusion and social mobility is at the heart of her practice. She hopes the overthrow the capitalist, ableist, white supremacist, heteronormative patriarchy with wxmen, sisterhood and performance witchcraft.

Jorja James is an actor and writer. As a polyamorous, mixed race, cisgendered woman Jorja James creates art that aims to question, reveal and DESTROY THE WHITE SUPREMACIST HETERONORMATIVE CLASSIST FATPHOBIC ABLEST MONOSEXIST PATRIARCH we live in by using multidisciplinary methods across all platforms. Jorja infuses her work with sex positive and queer magic. Jorja James is a mental health and neurodivergent advocate. In her most recent work Jorja collobrated with Shannon Mulvey to bring you 'Curated Pleasure'.

Shannon and Jorja will be discussing their show CURATED PLEASURE:
Curated Pleasure is a performance project which involves the collaboration of the artists Jorja James and Shannon Mulvey. The show has been performed this summer at Anatomy (Summerhall, Edinburgh), Clout! Festival (Studio 3 Arts) and Sprungturm Festival (HoffArt Theater, Germany).

Be ready to have your understanding obliterated, your desire recognised, your power fortified. Enter our spectral world of intersectional feminist witch BDSM pleasure. You'll never be the same again. Come and join our coven of womxn as we activate your senses and collectively destruct the patriarchy. Our coven explosively tests the boundaries of our unquestioned heteronormative society whilst observing 'the personal is political'. Prepare to embrace the flow of the feminine and your sensuality. Leave your ego at the door and you'll be left begging for more. A riotous exultation to the deities who give us the strength to become warriors.

Chantelle Dusette is a writer and performer. Chantelle wrote and co-produced a one- woman 5* show Cancel the Sunshine at The Hope Theatre, commissioned by the NHS and toured across hospitals to practitioners and service users. More recently Chantelle’s writing credits include: Pillow Block as part of The Significant Other Festival (The Vaults); Hello for SLAMinutes Goes Mental (The Crypt, Kings Cross); Frames for The Dot Collective (Southwark Playhouse). This year Chantelle’s play Click made the final for Off Cut Festival in Manchester (53Two). Frames was repurposed by The Dot Collective and used to form part of an immersive experience around dementia awareness at The Old Vic Workrooms in May. Where de Mangoes Grow has been performed at Bunker Theatre for The Upsetters in June, The Pleasance in July for MetaMorph Theatre and Theatro Technis for Kibo Productions in August.

Chantelle is showcasing a new piece EV(E)OLUTION as part of a staged reading at The Criterion Theatre and is currently co-producing a micro-festival of short plays with Iskandar Sharazuddin (Ellandar Productions) for The White Bear, which will include her script Shadows.

Kudzai Sitima trained at Rose Bruford College in European Theatre Arts. Her first acting role out of drama school was in debbie tucker greens ‘generations’ at Chichester Festival 2018. She went on to lead in Princess and the Hustler of which she has been nominated for ‘best performance in a play’ by the Uk theatre awards 2019. Kudzai has just finished performing at Shakespeares globe in ‘As you like it’ as part of their 2019 summer season.

SUZY GILL
Suzy Gill is an actress, playwright, poet, podcaster & freelance theatre producer. Alongside this she’s written a dating column, accidentally went viral thanks to the Huffington Post publishing her work and has become an expert on horror films thanks to the podcast she co-hosts with Niamh Handley-Vaughn. She contributes to The Authentic Project, has co-produced shows at venues including the Arcola and SLAM Kings Cross and regularly works alongside and for charities using theatre and the arts to bring awareness to their work and fundraise. These charities have included Contact, Kisharon and One in Four. Suzy’s current show, the self-penned Out of the Dark, opens at the Rose Theatre Kingston on 30th October.

Heather Duster is the worlds first Drag Queen Cleaner (probably!) She's determined to clean up the world one mess at a time and her citrus shine kills 99.9% of haters! Heather is currently performing and competing in The Gold Rush every Monday evening at The Glory. This Bake-Off style Drag competition knocks a performer out every week until one is crowned the winner! Heather was most recently seen performing for the Sink The Pink Street Party in Finsbury Park and with Pussy Liquor Collective in New Cross.

This is a fundraising event produced by Christine Mears in collaboration with Kirsty Blewett and Lobster Frock Theatre Company. Profits will go towards the creation of Lobster Frock’s new show, 'The Pursuit of Success' which will be performed at Theatre Deli, Broadgate on the 7th November 2019. 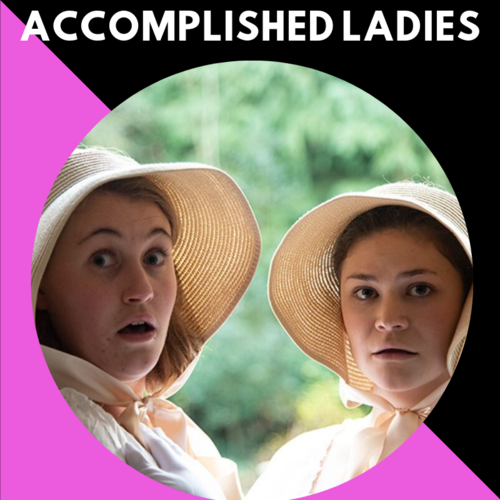 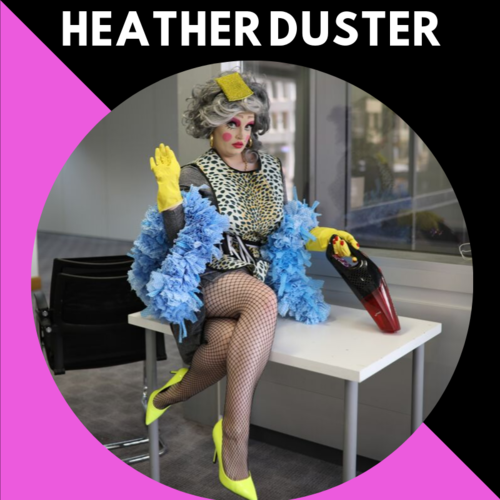 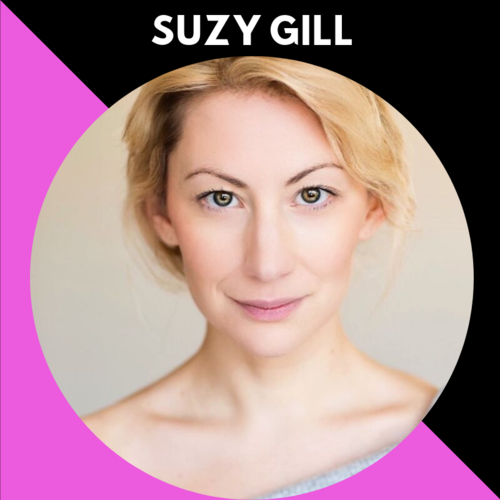 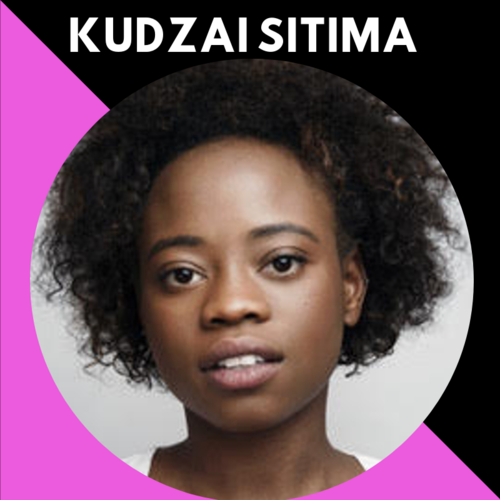 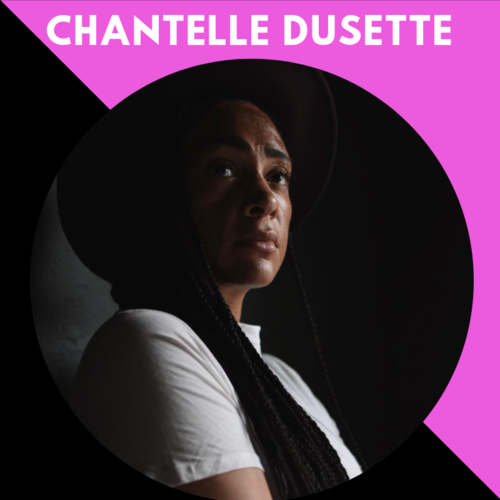 LOBSTER FROCK are a Surrealist, Feminist theatre company. We provoke people to see the world differently.