Wild Shenanigans is a festival of clowning, slapstick and mayhem. Join us for a week of wild comedy created by some of the UK’s most talented idiots. With cabaret, clowning, stand up, sketch, music and more, there is something for everyone.  Come and laugh at comedy in all its ridiculous forms with the infamous stage diva Nina Divina from Tuttifrutti cabaret, Russian clown Julia Masil (Pete Nash Comedy Award Winner), Viggo Venn the Viking (Best Comedy Award Winner, Adelaide Fringe) and many more!

Who’s up for some Wild Shenanigans?

Join Nina Divina - actor extraordinaire  - and her faithful assistant Lucia Bombilla as they attempt to stage the most tragic scenes of legendary women...and snakes.

Expect fierce flamenco dancing, seductive apple munching and that classic hit song we all know and love:  “I’m not a woman, I’m a snake!”. An anarchic, silly, fun-filled hour of clowning and cabaret that celebrates all things woman (and some things snake).

Mighty Boosh with Smack the Pony’s sly feminism all wrapped up in one glamorous clown cabaret.

A Mouths of Lions and Tuttifrutti co-production presented as part of Wild Shenanigans comedy festival.

Award winning comedian and clown Elf Lyons presents a surreal tale of love and loneliness. In the style of a 1980s Elton John rock concert.
In October 2018, Elf was taken to hospital and told it was best she never perform again.

After months lying on her back and recovering from spinal surgery, Elf had to rethink what she was going to do*. This is the show she devised in response : A work-in-progress show about being a work-in-progress.

Music, Mime, Clowning and entirely true stories, join Elf as she embodies her inner Elton on an absurd narrative of love, heartbreak, hospitals, friendship, romance, re-learning your own body and rodents.

This is the perfect show to take a tinder date to, an ex, a friend who is going through a difficult divorce, that guy you know from your book group, your step-mum as an attempt to ‘bond’ and indeed your work team on a social outing. Or just come on your own and be a legend.

(*One of the things Elf DID decide to do was rescue two Guinea Pigs.)

Venn presents his work-in-progress of Viggo the Viking. 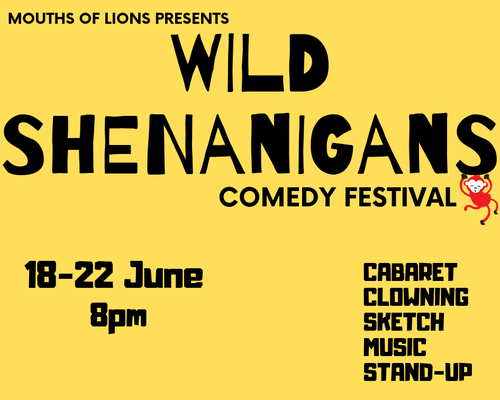 Presented by Mouths of Lions

If you have any access requirements, please contact us on 020 7701 0100 or [email protected]. Our theatre space is on the ground floor and is wheelchair accessible but unfortunately, our bar upstairs is not.

Concessions are available to students, people over 65 and those receiving unemployment or disability benefits. Please bring proof of entitlement.

Please bring proof of living in Southwark if you book a discounted Southwark resident ticket.

Please note that we cannot issue refunds once tickets are bought. Please contact Blue Elephant Theatre directly if you wish to switch nights, which may be possible subject to availability.

Our bar and our box office open one hour before the show starts.

Please do not be late as we may be unable to admit latecomers.

Ticket Holders can avail of an exclusive offer from our new neighbours Golazio at 59 Camberwell Road. Show them your booking confirmation to get an Italian Craft Beer and large slice of pizza for £7!

Blue Elephant Theatre produces an eclectic programme of new work across the performing arts from physical and dance theatre to new writing and revamped classics.

Some of Blue Elephant Theatre's other events

How Bright She Must Have Been